In the outdoor cooking world, there’s nothing quite as big as outdoor pizza ovens right now, and Alfa Ovens has been creating them for over 40 years.

Today, we’re reviewing two different Alfa pizza ovens that we have added to our outdoor kitchen and are showing you how you can cook more than just pizza in them.

We took delivery of our Alfa outdoor pizza ovens in October of 2021, and promptly called most of the guys we knew to schedule a time to get them out of the box and installed in the outdoor kitchen.

It’s probably no surprise to anyone that the pizza ovens ship on pallets and are delivered in a semi-truck and that you’ll need a lift gate during delivery.

We had two pallets delivered since we picked up the Alfa 51″ multifunctional base to set the wood fired pizza oven on. The base had a pallet to itself so things weren’t stacked on top of it, which meant that the top was pristine when we got it open.

Unboxing both pizza ovens, I had a helper in my son Ethan, and most of the pieces of each outdoor pizza oven came stored inside the ovens when they shipped.

I couldn’t believe that the entire exhaust stack fit inside each pizza oven, but it did.

Unboxing each pizza oven took about 5 minutes, and most of that time was simply spent looking over each piece to figure out what it was. There was very little to actually assemble on each unit.

In order to move the 4 Pizze wood fired pizza oven from the garage to the outdoor kitchen, we took everything out including the oven floor firebricks of the pizza oven, and that lightened the load enough that we could pick the 315-pound oven up and move it with 5-6 guys.

I learned after the fact that we could have also taken out the Gasbeton layer as well, which would have made things considerably lighter.

At only 110 pounds, the Alfa Nano propane oven was significantly easier to move to the outdoor kitchen with less help.

When it comes to the build quality of the Alfa 4 Pizze wood fired pizza oven, I don’t think I can say enough good things about it. This is an incredibly well-built and thought-through outdoor pizza oven.

First off, I just flat-out love the look of it. When I look at this Alfa pizza oven, it’s sleek, it’s smooth with rounded edges all over, and it just says refinement to me when I see it.

I love how the stainless steel on the front shelf is bent with a rounded edge instead of a 90-degree angle bend. It’s the small touches like that I find to be some of the most appealing.

Another aspect I think about quite often is how the exhaust is handled with this outdoor pizza oven. If you look at the top of the oven, you’ll see that there’s a flue system in place that basically forces the heat to radiate throughout the pizza oven before it exits. Alfa calls this their Heat Genius Technology. Instead of just a port in the top of the oven, there’s a heat baffle plate that the heat and exhaust run into before it exits, allowing the pizza oven to retain more heat longer.

The entire cooking chamber is made of reinforced stainless steel and there is a double layer of ceramic fiber insulation to contain the heat and protect the external frame.

This is why when I run this oven between 800-1000°F on the inside of the cooking chamber, I can still put my hand on the outside of this wood fired pizza oven and not get burned.

Starting a Wood Fire in the Alfa 4 Pizze

I start by laying two-to-three small logs about the size of my forearm directly on the bricks in the center of the pizza oven. I’ll lay a few more splits the opposite direction of the first two, creating a log cabin like I used to out of Lincoln Logs when I was a kid. 3-4 layers is about as high as I go.

Then I will either use the GrillGun (which is a propane powered torch) to get things going, or I’ll use my Looftlighter X with a bit of kindling right in the front, or If I’m in no rush, I’ll just put a tumbleweed fire starter underneath the wood on the second row of the cabin, light it, and go about assembling the food that I’m about to cook.

The whole point of starting the fire in the middle of the pizza oven is to warm up the bricks where I’ll be cooking. I want the bricks in the center and on the right to be hot when I move the wood over to the left side of the oven to give myself maximum room for food.

I use the Alfa Pizza Ovens toolset with this wood fired pizza oven. I use the rake first to push all of my coals and partially burned wood splits to the left side of the oven to get things started.

After everything is moved to the left side, I’ll use the copper brush to sweep the floor of any ash or remaining embers that I don’t want to get in my food. Once the bricks are clean, it’s time to cook.

In order to keep the fire running between 700-800 degrees, I’ll add a new split to the fire about every 5 minutes to keep it at the right temperature. I find that I can wait 10 minutes between splits of wood, but I’ll see a dip in temperature below 700 after 10 minutes, and I find that 5-7 minutes is a good marker for me of when to add a small split to keep the temperature where I want it.

A little trick that I picked up along the way is to use the turning peel to place the small logs on the coals instead of sticking my hand in the outdoor pizza oven. I’ll just set the wood on the brick, lift it up with the turning peel, and place it directly on the coals.

Cleaning the outdoor pizza oven after use is pretty easy. I’ve gotten into the habit of spreading out the coals after each cook to cover the entire oven floor. It allows the coals to burn off anything that might have gotten stuck on the bricks during cooking.

The next day, I’ll use the brush to move all the ash and coals to one side of the pizza oven, and use the shovel to remove the ash to prep the oven for the next cook. Oftentimes, I’ll also go ahead and set up my log cabin of wood so that it’s just taking off the front door and lighting it up next time. It makes sure that I have dry firewood to start my wood fired pizza oven every time.

The only other cleaning that I’ve had to do with the Alfa is cleaning off the soot that will accumulate after many cooks above the pizza oven door. I’ll take some liquid Bar Keepers Friend, apply it to a microfiber cloth and just wipe in small circles. The soot comes off in about 60 seconds and the thing looks brand new.

On weeknights, I don’t always have the time to set up a wood fire, and this Alfa Nano gas pizza oven is as easy as.. turn, click and fire.

When I look at the build quality of the Alfa Nano compared to some of the less expensive pizza ovens that are on the market, there’s really no comparison that I’ve had hands-on experience with.

The Alfa Nano pizza oven weighs 2-3 times more than others in the category, and it just feels incredibly dense. It’s well insulated, with four oven floor firebricks that are dense and heavy. The fit and finish are the best that I’ve seen on the market at this price point.

The Nano, originally named the Alfa One, has the same reinforced stainless steel inside the cooking chamber and double layer of ceramic fiber insulation found in the 4 Pizze, protecting the external frame and making it cool to the touch on the outside even when cooking at maximum temperatures.

I love the roundness of the edges on the front lip of this pizza oven, the texture on the outside of the oven is fantastic. It just looks and feels like it’s in another class when compared to other outdoor pizza ovens on the market.

To know when the pizza oven is ready to cook a pizza, I use a Thermoworks infrared thermometer to check the floor temperature where I’m planning on cooking. I just shoot the laser right at the floor, and as long as I’m seeing 500°F+ , I know that I can launch a pizza and the bottom crust will cook through.

To get a clean launch into the pizza oven, I make sure to dust the pizza peel with semolina flour before I put the dough on the peel, and then it’s an easy slide off into the oven. As soon as the edge of the pizza hits the heated bricks, I can just pull out the peel and the pizza if perfectly positioned and ready for a 60 second bake.

I find that I need to rotate the pizza about every 15-20 seconds to make sure that all sides of the crust cook evenly, and it happens so quickly that there’s not much time to walk away when you’re cooking in the 750-800° range.

You can learn more about how to make Neapolitan pizza dough and successfully launch a pizza into an outdoor pizza oven here.

These Outdoor Ovens Aren’t Only For Cooking Pizzas

The Alfa Nano has truly become our weeknight cooking device as we can cook such a wide variety of foods in it. Dry foods like breads, naan, and tortillas can cook directly on the stone, and anything with moisture should be cooked on a high-temperature tolerant pan, like cast iron.

Find an Alfa Ovens Dealer Near You.

The ZGrills Multitasker 11002b wi-fi pellet grill is a beast of a grill at the $1,200 price point. The goal of this article is to help you decide if this...

The Best Kamado Grill for 2023

We're taking some of the most popular kamado grills, such as Big Green Egg, Kamado Joe, and Vision and running them all through 20 tests to see which one is...

Today we're taking a look at the all-new FireBoard Spark, the only instant-read thermometer with an external probe port that allows it to also function as a leave-in thermometer.  ... 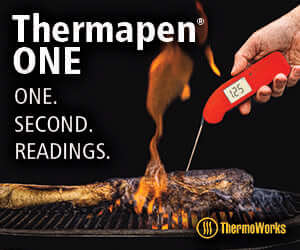