Obesity is an ongoing problem for adults and children alike in America. Obesity is the 5th leading cause of death in the world, and it’s not going away anytime soon. According to the most recent statistics from the Center for Disease Control (CDC), the prevalence of obesity in adults in America is 42.4%, which has increased from 30.5% in 1999. Adult obesity is defined as having a body mass index (BMI) of greater than or equal to 30. Normal BMI for adults ranges from 18.5-24.9.

Experts predict that obesity rates will continue to climb to over 50% prevalence in the next 10 years, and every state will have an obesity rate of at least 35%.

Here we see the prevalence of obesity & severe obesity listed by race.

What are the reasons behind the increasing prevalence of obesity? It’s a multi-faceted issue, to be sure. It’s not laziness or simply a lack of will power, it’s a way more complex and complicated metabolic issue. Chronic low-level inflammation, disrupted glucose (sugar) and lipid (fat) metabolism, genetics, income levels, education, access to healthcare, busy lifestyles, stress levels & mental health- including binge eating disorders, rates of fast food consumption, dependence on technology, and conflicting diet information all have a part to play. It’s no wonder obesity rates are going up.

160 million Americans are obese or overweight

Below we can see the top 10 states with highest prevalence of obesity, and the 5 states with the lowest obesity prevalence per population, with rural areas having more prevalent obesity rates than metro areas. There is no state with a lower prevalence than 23% obesity. That means that almost 1 in 4 people are obese, and that’s the minimum in the US.

Obesity in America by environment 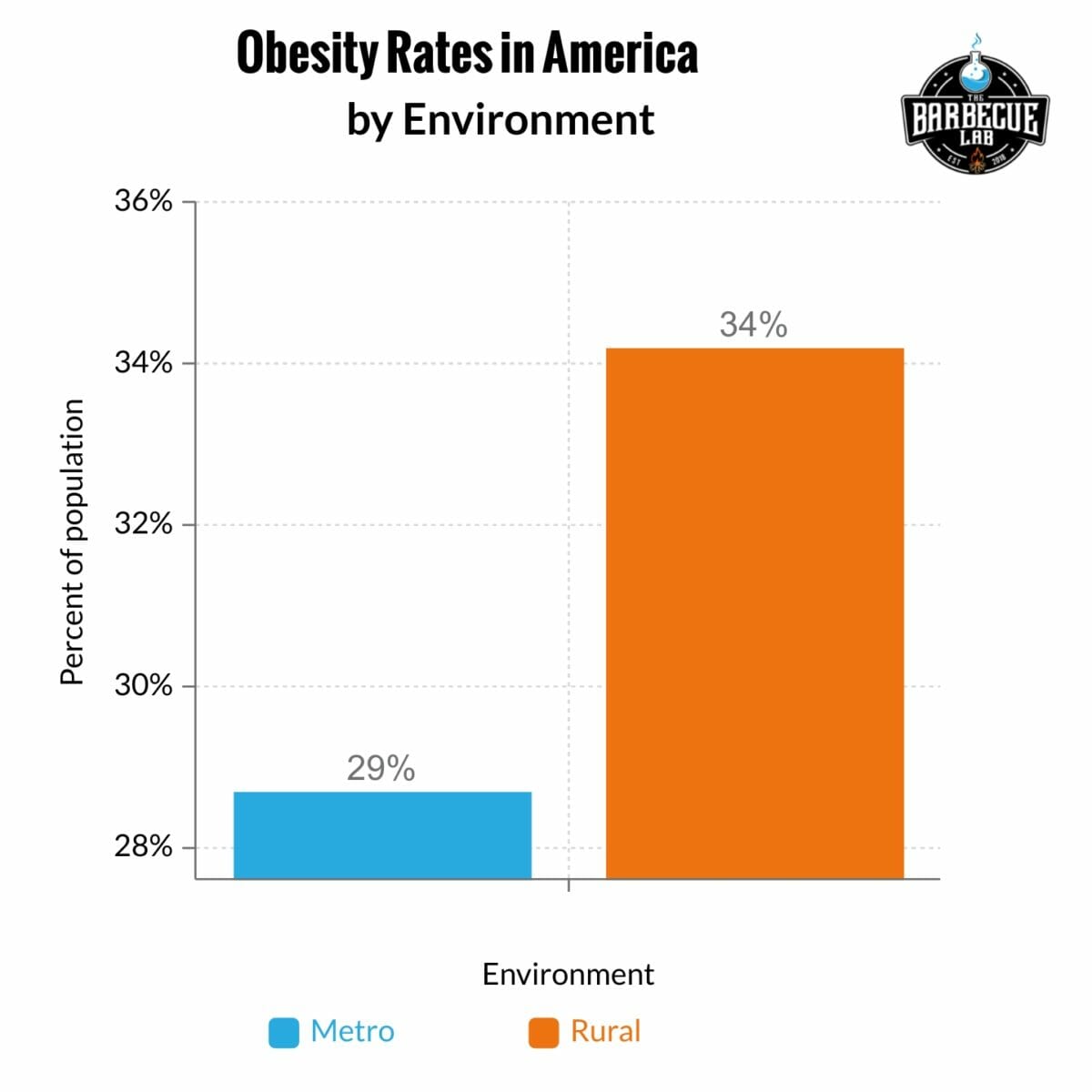 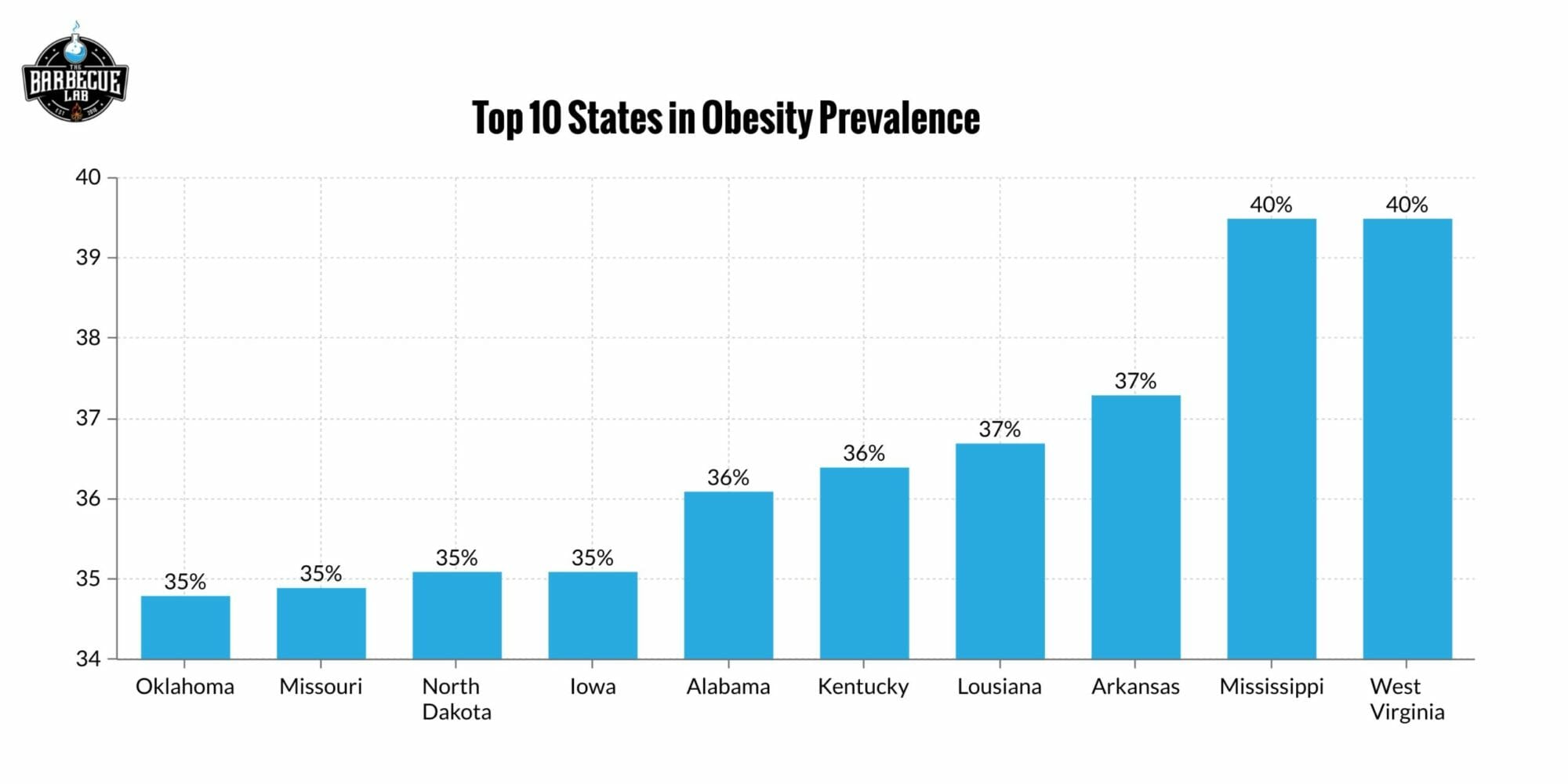 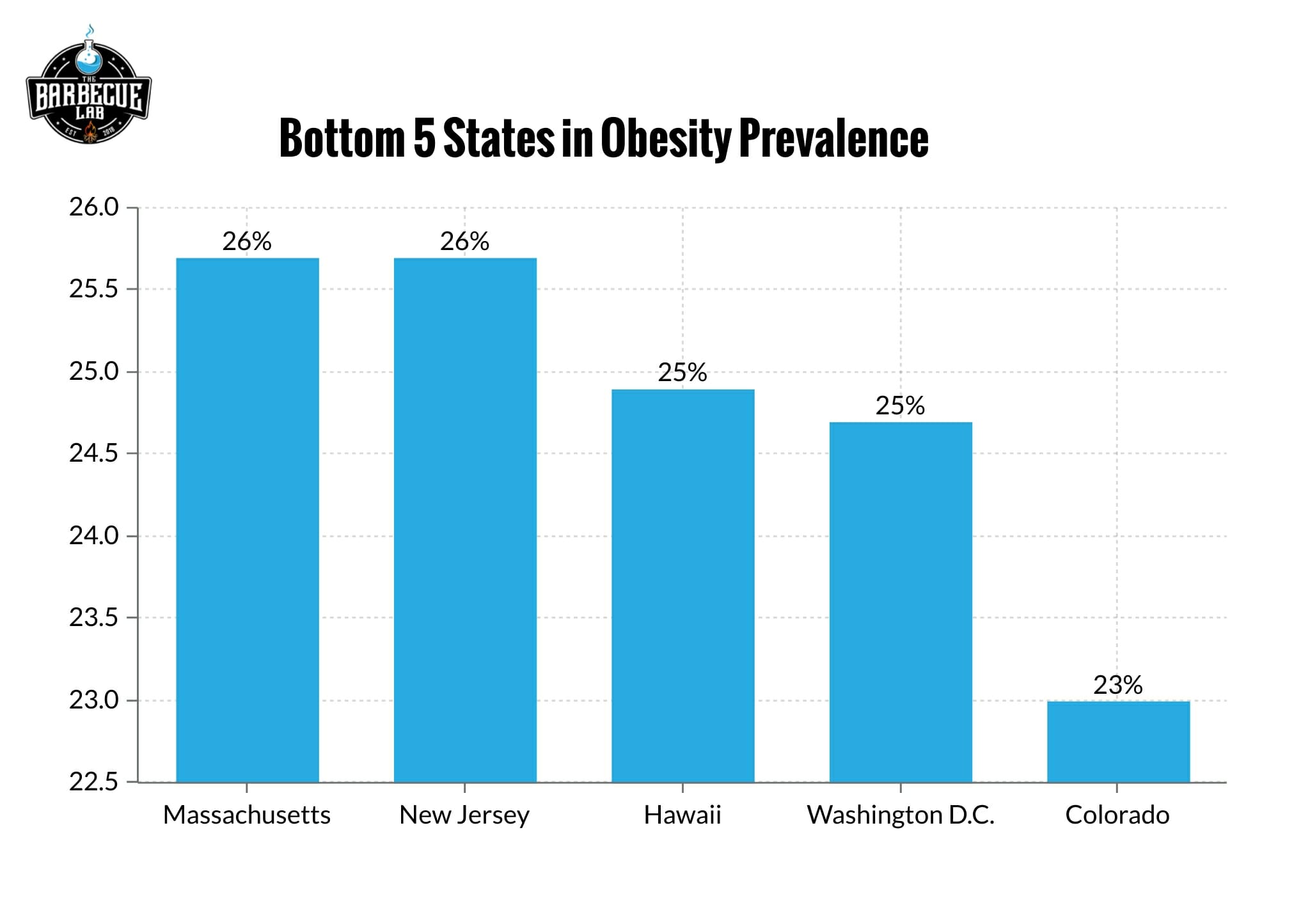 Obesity is more of a problem in developed, industrialized countries. There are 2.1 billion people worldwide who are considered obese - almost 33% of the world’s population. Here are the top 10 countries where 50% of the total obese people reside.

Over 50% of total obese people live in 10 countries: 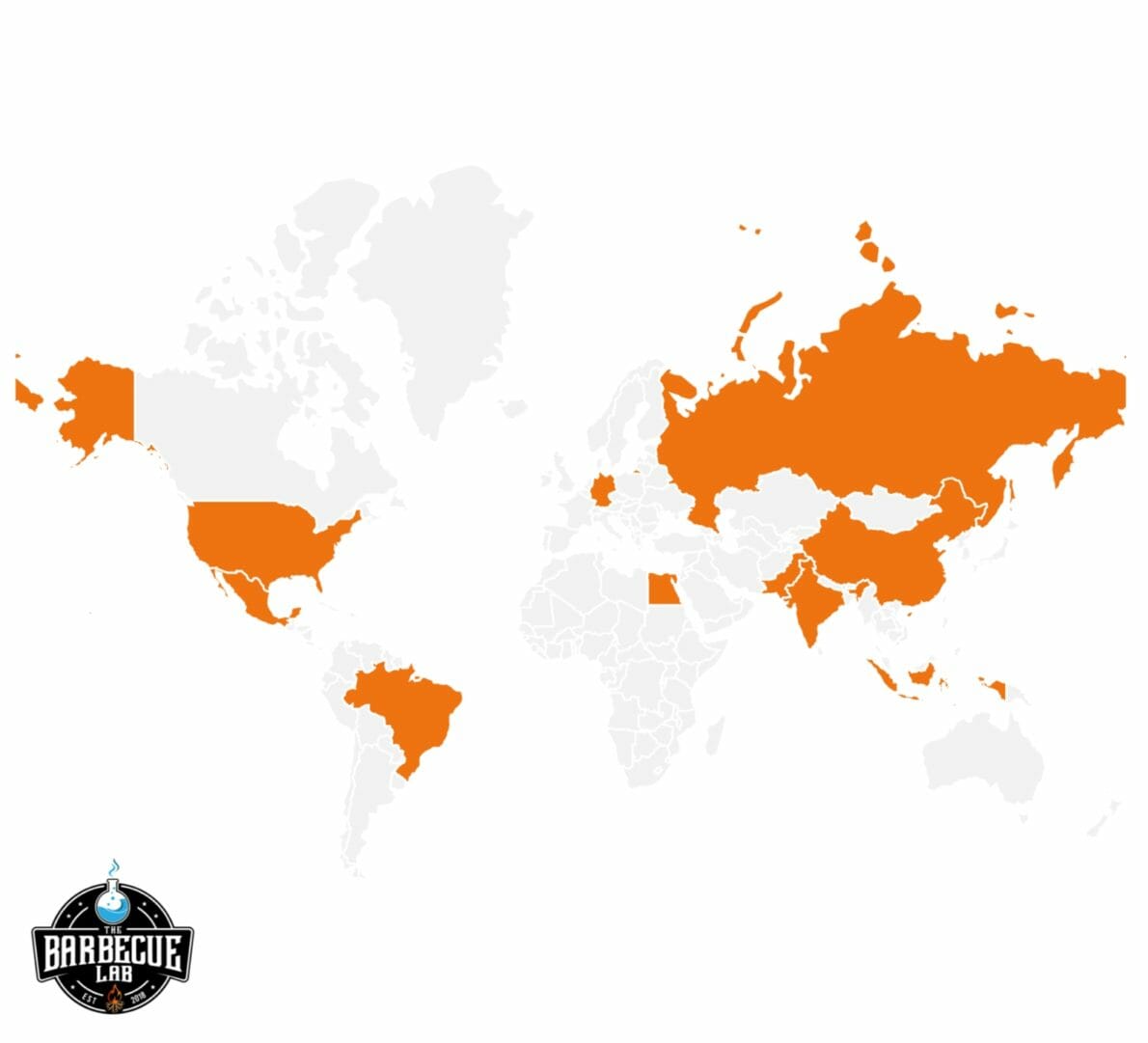 Chronic diseases of lifestyle, including everything from heart disease to type II diabetes to joint pain, take a toll on Americans and their families physically, mentally, and financially. Not to mention the stigma and self esteem issues that come from being overweight or obese.

A person with obesity will have a higher chance of developing cardiovascular disease, stroke & most types of cancer. There are around 112,000 deaths per year that are related to obesity. Heart disease is the leading cause of death in the United States, and almost 50% of deaths from cardiovascular disease, diabetes and strokes are due to poor diets.

The problems with being overweight and obesity are numerous and cost Americans $147 billion per year, which is 21% of the medical spending in America. If no changes are made, then costs are projected to rise from $48-66 billion in the next 10 years, which makes sense if trends continue and 50% of the US population will have obesity.

Most 9 year old girls have thought about dieting, and most people with an eating disorder develop it within their teen years for fear of becoming fat or body-shamed. While half of teens think they are overweight, only 14.8% of high school students actually are obese.

Obesity Rates of High School Students in America by Gender 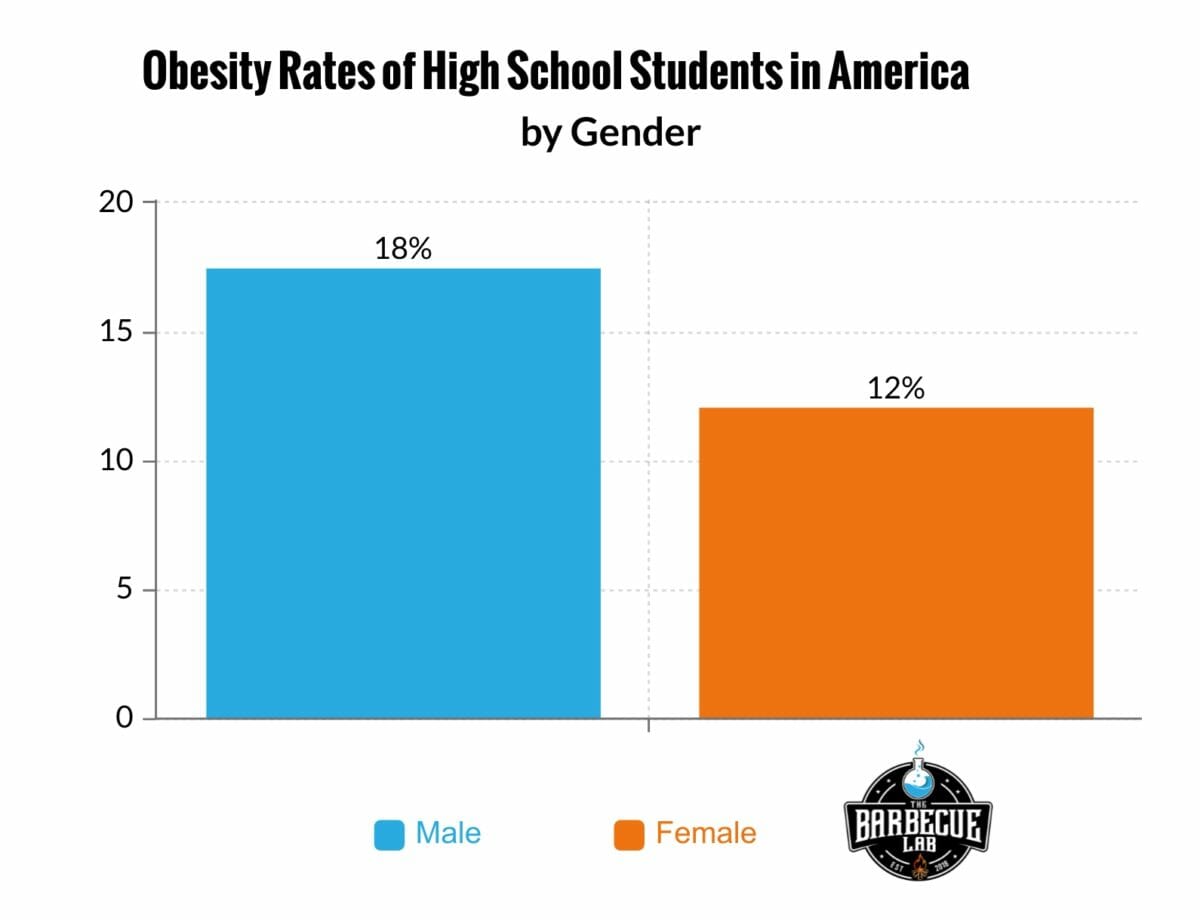 Although diet has a much bigger role to play in obesity, exercise & movement are important too. As technology increases, there is a trend that shows there is less physical activity.

Many people have a desk job or sit for most of their work day, and then sit to drive or ride home from work. It’s estimated that 40% of adults do not engage in physical activity outside of work.

And while the amount that the average American spends watching tv per day has gone down to 3 hours & 29 minutes, there is no reason to believe that screen time is going down. Other people are turning to phones, tablets, and laptops and streaming their entertainment. 81% of American adults use the internet daily, and 30% say they are “almost constantly” on the internet.

Children are spending more than 7 ½ hours a day in front of a screen, whether that be in the form of TV, video games, computers, tablets or phones. Too much screen time has been linked to obesity, sleep problems, behavioral problems, less time for play, and lack of social skills. The same could be applied for adults.

Many Americans are trying to eat healthfully, but there is so much differing information available that it is confusing and difficult to know which to follow. The current evidence is clear on one thing, both the quality and quantity of food matters.

Indeed, most Americans do not get the recommended daily amount of vegetables, and get more than enough of the recommended allowance of saturated fat and sodium. These often come from fast food or ready made meals.

Eating healthy and eating the right amount of vegetables and fruits can often help with many problems that are associated with vitamin deficiencies, like muscle aches & pains, sleep problems, focus problems, and can even help with some mental health issues.

In fact, people who regularly consume fast food are more subject to mental health issues like depression and anxiety. Perhaps that tendency is present because a portion of their diet consists of food that has been processed. Nutrients are stripped away due to the way from food while it’s processed and then are added back in artificially.