No great story ever started with, “I ate a fantastic salad.”

Healthy eating and reducing weight is an ongoing hot-topic in America. The methods and prescribed diets seem to change as fast as Clark Kent changing into Superman. Champions of a particular diet plan will cite many sources & tout many benefits on why their diet is the way to go. They have the proverbial “key” to weight loss and health management.

One thing we can know for certain: what you eat affects your health, longevity, immune system and appearance. While this saying is over-simplified, it’s a powerful way to convey this idea: you are what you eat.

Food Consumption in the United States

There are roughly 209 million adults in the United States - and 117 million of them have a preventable chronic illness related to their eating patterns. That’s about 55% of the population.

The most recent statistics from the CDC show that heart disease is still the leading cause of death for Americans - there are roughly 647,000 deaths a year due to heart disease. About 50% of deaths from heart disease, diabetes, and strokes are the result of poor diets.

According to the CDC, 42.4 % of American adults are obese, which is an increase from 30.5% in 2000. 18.5% of children are obese. For adults, that means there are 42.4% of adults with a BMI greater than or equal to 30. Children with a BMI at or over the 95% of their sex-specific BMI growth charts. The Health and Human Services division of the US Government estimates that half of all US adults will be overweight by the year 2030.

What Are The Benefits Of Eating Healthy?

Eating a healthy diet and exercising can greatly reduce chronic issues. It’s estimated that a whopping 80% of chronic disease can be prevented through healthy eating and changing lifestyle habits.

While 93% of Americans express the desire to eat healthy, only 10% of consumers say they eat healthy ALWAYS. As we can see from the results of this survey below, the majority of consumers think they eat a healthy diet at least sometimes. But given the rates of obesity and chronic diseases in America, something isn’t adding up.

In fact, around 75% of people think their diet is “good, very good, or excellent,” but with 42.6% of Americans being obese, there are other factors to consider. There seems to be a disconnect between knowledge & behaviors.

How Often Consumers Think That They Eat A Healthy Diet 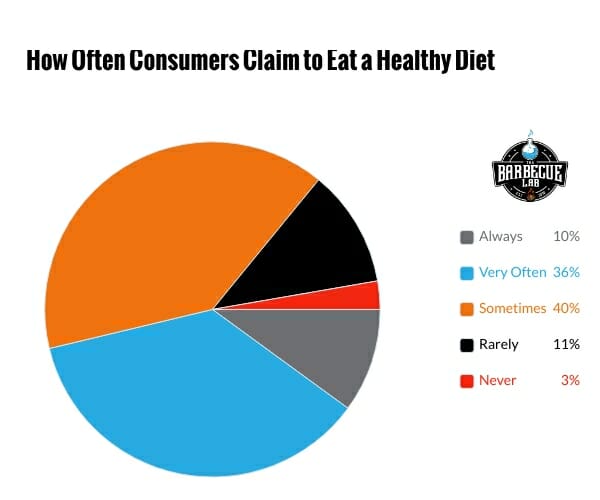 According to medical experts, a healthy & well balanced diet should come from carbohydrates that include mostly green leafy vegetables and fruit, healthy fats, and proteins. There are specific guidelines to help Americans plan their meals, but how are Americans measuring up to the dietary standards?

Where Should Calories Come From In A Healthy And Well-Balanced Diet?

Current Fruit And Vegetable Consumption In The US Statistics

Percent of Americans that meet recommended intake of different foods:

Americans are Trying to Eat Healthy

Americans are trying to better themselves. Over ⅓ of Americans have followed a diet in the last year, and around 29% of people have tried to eat smaller portions within the last year. The top reasons Americans give for wanting to eat healthier are cardiovascular health and weight loss. Increasing energy, improving brain function & improving digestive health are some other reasons people give.

Around 36% Americans have followed some sort of diet in the past year. The most popular including one or both of  intermittent fasting, and some type of carbohydrate restrictive eating. These diets include  paleo, low-carb, Whole30, high-protein & high-fat. Perhaps it’s because of the conflicting information out there, but only 45% of dieting Americans are confident that their diet will give them positive results.

Most popular diets used by dieters

Regardless of the diet method you choose to follow, most diet and nutrition experts agree with removing “white carbs” - white, refined grains & sugars, including those in sugary drinks like soda, will help reduce a multitude of health issues. Around 50% of people try to avoid foods with added sugars.

In a survey conducted from 2013-2019, consumers were asked to rate which calorie sources are responsible for gaining weight. Compared to data from 2013, more people now rate sugar as the source of calories most likely to cause weight gain. In 2013, 30% of respondents to a nutrition survey thought that all sources of calories had equal potential to cause weight gain while 22% thought sugar was the culprit. Now, only 25% think that all sources have the same potential, while 27% of the respondents think that sugar is the top reason for weight gain.

While sparking debate among the paleo community, some nutritionists and doctors also say that adding whole grains can reduce heart disease by as much as 33%. Decreasing sodium intake can help reduce heart disease and stroke risk. Much of the sodium consumed is present in processed meals and convenience foods, like ready meals and fast food. Swapping darker meat for fish can help reduce some types of  cancer by up to 21%.

By eliminating snacking, and having well rounded meals by adding the foods that attribute most to weight loss can help immensely. These foods include nuts, vegetables and yogurt.

Big Business has wasted no time trying to increase their profits by making “healthy” food at the lowest cost. The healthy foods market continues to grow,  perhaps because more and more people are trying to eat healthy, but they also want convenience.

The global market for healthy food was on target to hit $1 trillion in 2019. And what’s more, 30% of food companies are invested in making healthy foods of some kind. Labels like “all natural” or “cage-free,” etc etc are all over packaging these days, and people are willing to pay the premiums for these labels.

88% of the people surveyed was they would be willing to pay more money for healthier foods. But here we have to see what is being defined as “healthy.” It’s such an arbitrary term.

For example, 71% of Americans think that granola bars are healthy, but only 28% of nutritionists think they are healthy. Many granola bars and loaded with sugars, sweeteners, and refined grains - making it only slightly “healthier” than a candy bar.

It’s more important to know which ingredients are healthy and scrutinize labels to make the decision for yourself.

Regardless of what diet you follow, by eating real food with minimal ingredients you can easily pronounce is a way to ensure you’re following a healthier lifestyle.

There are some estimates that eating healthy costs about $1.50 more per day per person. Over the course of a year, it costs about $550 more to eat healthy per person - so for a family of 4 that’s about $2000. That extra money is difficult to come by for many American families.

It’s estimated that Americans waste 25% of the food they buy, so perhaps it is not as expensive to eat healthy as we think. 77% of vegetables and 47% of fruits are largely affordable at less than $0.80/ cup. Frozen and canned fruits & vegetables are also available at affordable prices.