Hunger is a worldwide problem. The distress that is associated with lack of food is one that many people know all too well. While in more affluent countries, people worry if they go for 3 hours without eating. Sadly, with the current state of food insecurity, there are men, women, and children that go without food for days. The devastating effects are widespread.

In this article, we will look at a brief overview of world hunger. We will see which regions and countries are most affected by hunger and severe food insecurity. We will talk about some causes of hunger, what part of the population is mostly affected by hunger, and future projections.

When people don’t have steady access to healthy food and clean water, problems start to happen. While hunger is an issue deeply rooted in cultural practices, society, local politics, and climate, we need to be aware how our fellow humans are suffering around the world.

And while world hunger is down from 24% in 1990 to 10.9% as of this writing (2020), the current data shows that hunger is on the rise again. After decreasing for so many years, unfortunately, the World Health Organization has found that global hunger increased by 9 million people in 2018 from 811 million to 820 million people. 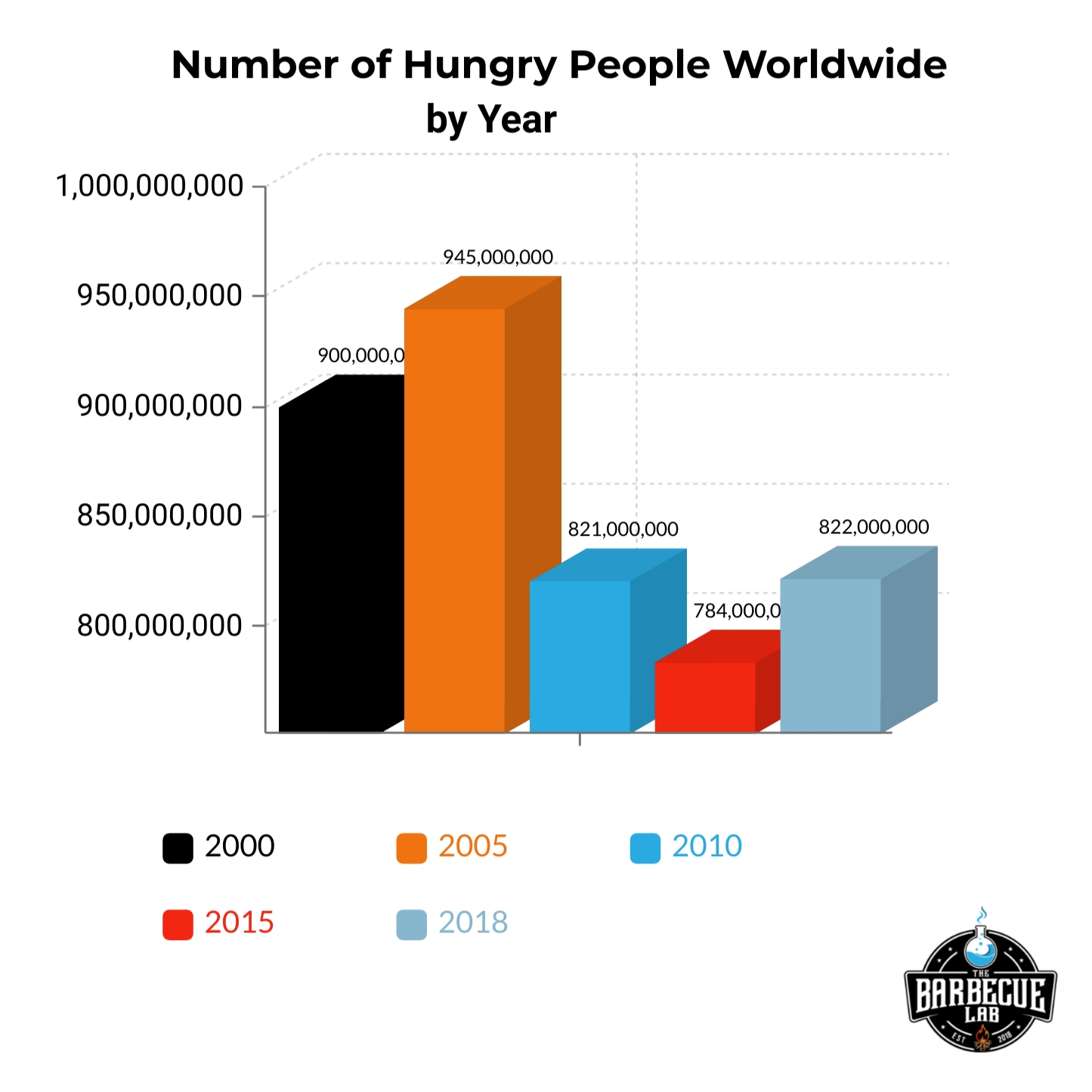 World hunger is a complex topic to discuss. What we are looking at here are three issues: food insecurity, malnutrition, and undernourishment due to lack of resources.

It’s important to note that food insecurity is a topic that includes hunger, but is also much broader. While 820 million suffer from hunger, there are 2.013 billion people around the world who are considered “food insecure.” This data shows how North America & Europe compares with the rest of the world in being moderately or severe food insecure. 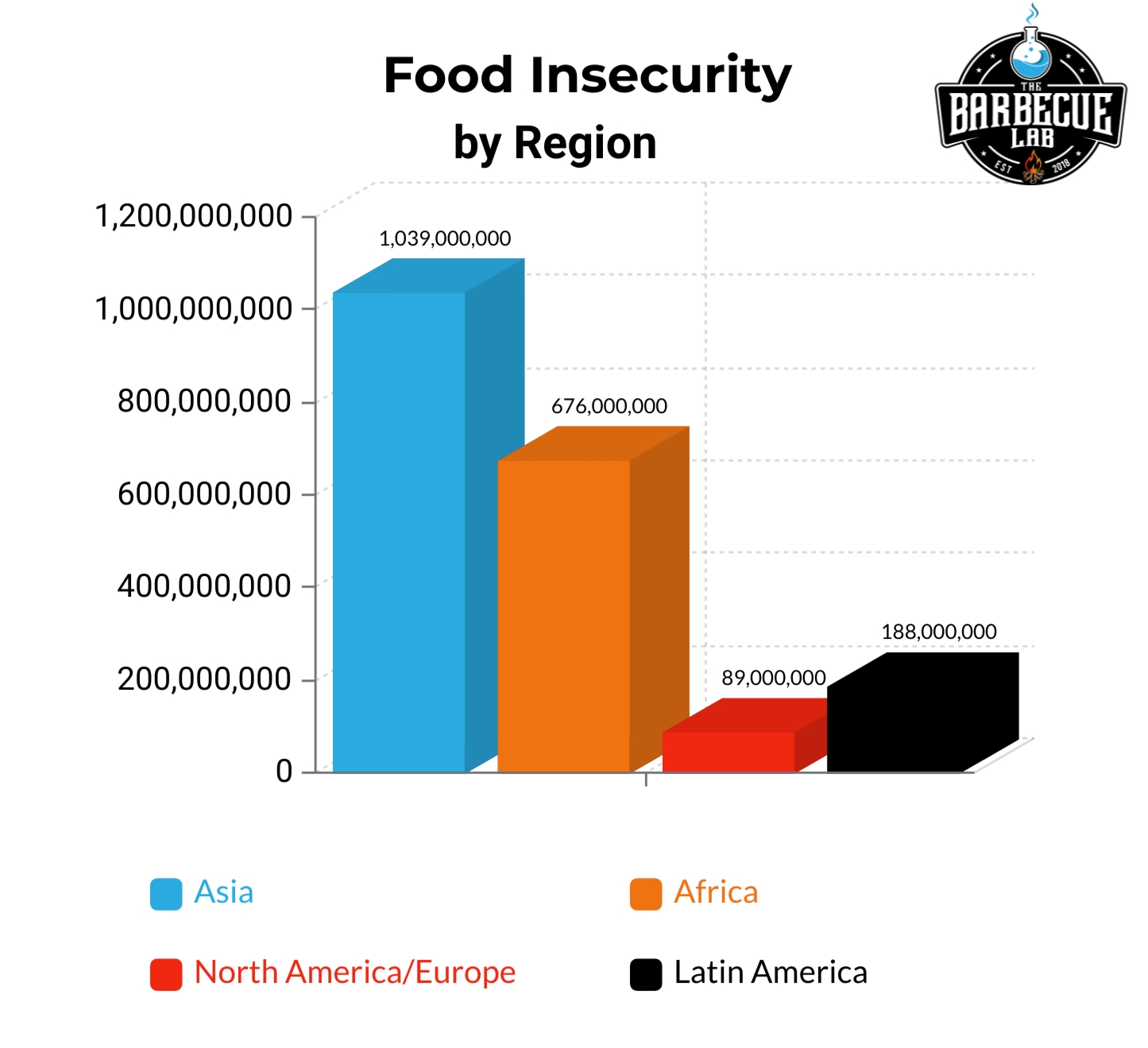 Undernourishment goes beyond malnutrition - people who are affected by it have:

Worldwide, approximately 1 in 9 people out of the 7.98 billion in population are affected by hunger.

Globally, 815 million people suffer from chronic undernourishment. You can be of normal weight or obese and still be undernourished, depending on the type of food you consume.  There are 462 million adults that are underweight worldwide.

Where is Hunger the Most Prevalent in the World?

While there are more people in Asia that suffer from hunger, the Sub-saharan African region has the highest hunger prevalence rate in the world at 1 in 4 people. That means that 25% of their entire population is undernourished. Asia’s hungry people are more spread throughout the region.

As you can see below, the highest rates of undernourished people are in these 3 regions - Africa, Asia, & the Caribbean. Below you will see just how high the prevalence of undernourishment really is. 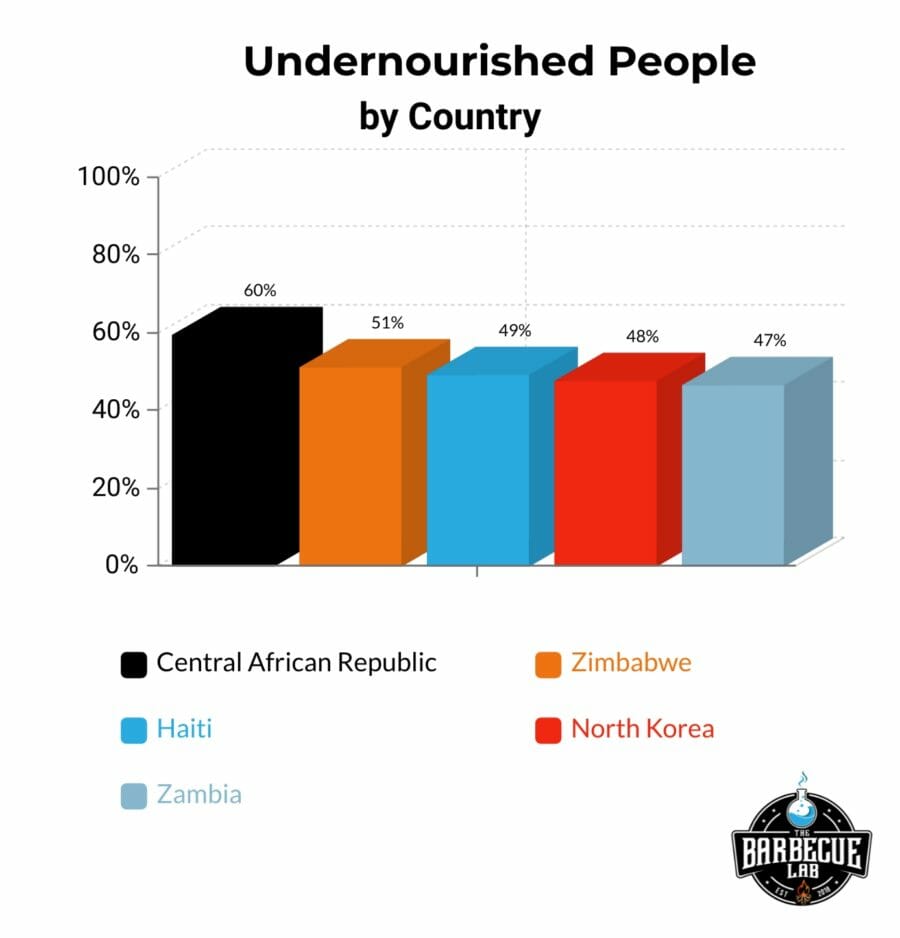 What are Some Causes of Hunger?

According to the United Nations, most hunger occurs in regions of the world that are poverty stricken and are ravaged by conflict or war. Chronic hunger is a complex issue that has many moving parts, including a region’s social norms, culture, and a variety of political and societal factors.

489 million undernourished adults and 122 million children suffer from hunger in countries that are affected by conflict. They lack food security and nutrition or steady access to food because of lack of infrastructure, conflict, weather, and natural disasters.

In countries affected by conflict, adults and children alike are less likely to have access to clean water and safe sanitation, making disease much more rampant. One newborn child dies every minute from lack of clean drinking water. 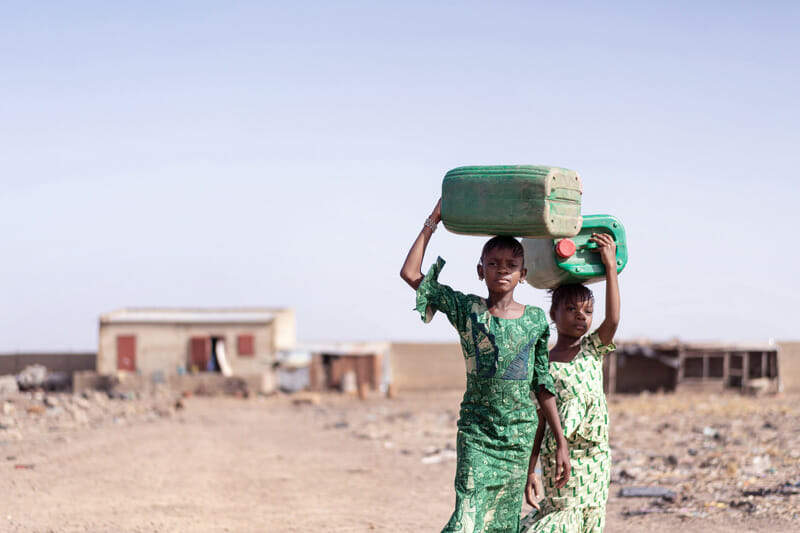 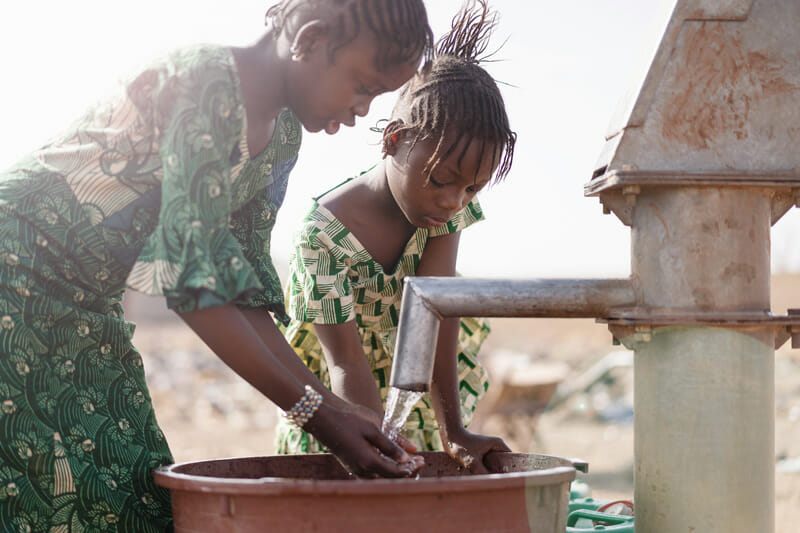 785 million people don’t have access to clean drinking water. Safe drinking water, and access to safe sanitation practices, including soap and water, are more available to rich people who live in urban areas.

Poverty also affects nutrition and health - it leads to hunger. 780 million people - or 11% of the global population -  live on less than $1.90 US/ day. Most people living below the poverty line  live in the same regions where hunger is widespread, Southern Asia & sub-Saharan Africa. Looking worldwide, In 2018, almost 8 per cent of the world’s workers and their families lived on less than US$1.90 per person per day.

Half of the poorest people in the world grow their own food. Hunger can arise during a drought causing famine, when people are displaced during wartime, or due to other factors like natural disasters.  Mass producers of food also threaten these local family farms.

Women and Children are Mostly Affected

In male dominated cultures, women and girls have limited resources that are available to men: finances, education & job opportunities. Because of this, 60% of people who suffer from hunger in the world are women & girls.

The lack of clean water and steady access to food increase rates of disease since water is contaminated with bacteria that can cause dysentery or typhoid. Malnutrition also makes for weaker immune systems, so people cannot fend off illness.

A mother who is undernourished will give weight to infants with low birth weights. Low birth weight infants are more at risk for death, developmental delays, and growth stunting. 17 million children are born undernourished every year because of the mother’s malnutrition during pregnancy. 149 million children are growth-stunted due to malnutrition.

17 million children are born undernourished every year because of the mother’s malnutrition during pregnancy.

Here we can see where malnutrition hits the hardest. 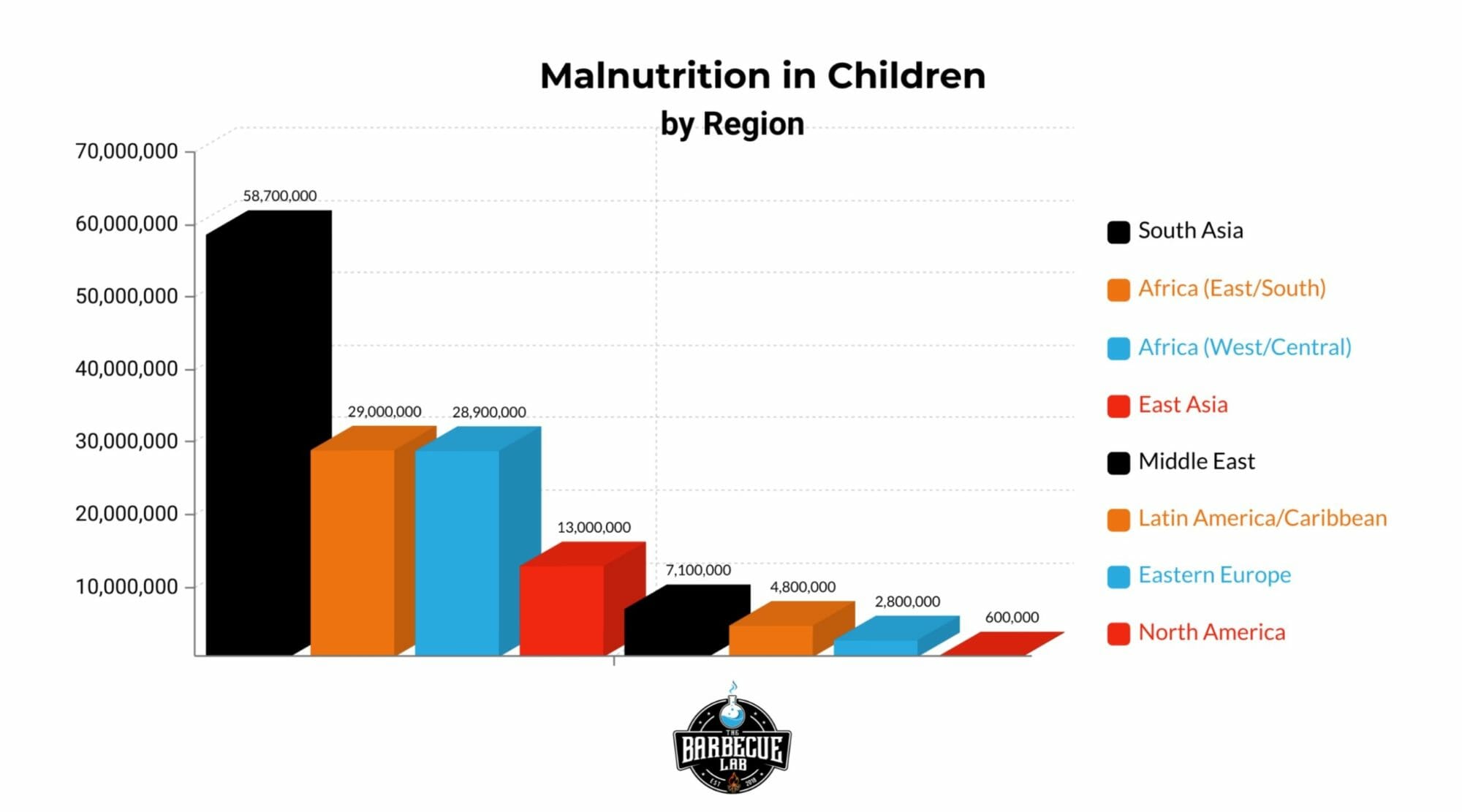 Worldwide, we produce enough food to feed 7 billion people. We can feed everyone. However, approximately $1 trillion worth of food is wasted every year. Because of the lack of resources, lack of infrastructure, social norms and political policies, people that are still hungry and in poverty are unable to solve their own hunger. They lack the land to grow their own food or do not have enough money to purchase it.

Providing education and resources to develop sustainable practices will be key to helping in the fight against worldwide hunger. Many organizations like UNICEF and the World Health Organization are looking at how to help end the global hunger crisis and achieve food security worldwide. The United Nations has a goal to end hunger by 2030.